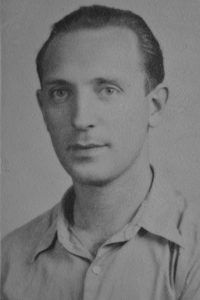 Dady was born on September 7, 1911 in Birtultau, Germany (now Biertułtowy, Poland), the youngest sibling to brother, Ismar, and sister, Rosa. By the time this strong-minded and politically aware student reached high school, he identified as a socialist, a volatile situation for a young Jewish student. In January 1933, Hitler became the Chancellor of Germany and began to impose certain rules to enhance his societal agenda. Even then, the defiant Dady remained seated and refused to join his fellow students as they sang the Horst-Wessel-Lied while standing and giving the Hitler salute.

The talented young man got accepted to the Breslau Polytech as an Architecture major, but was unable to enjoy his studies for long. In 1934, following the arrest (and later murder) of his girlfriend and fellow socialist sympathizer by the Nazis, and with the help of some friends, Dady fled to Czechoslovakia, which was not yet occupied by the Nazis. There he met his future wife, Renate (Omama to us), a member of Blau Weiss, a Jewish youth organization. In 1935, Czechoslovakia too fell to the Nazis, and the young couple decided to leave Europe for good. Soon after they sailed the Mediterranean and arrived in Haifa, Palestine via Alexandria, Egypt.

Back in Germany, Dady’s father, Isaac, upon hearing Nazi soldiers making their way up to the apartment to arrest him – hanged himself in the bathroom shower. Dady’s mother and sister managed to escape. His brother had already escaped to Holland, and would later come to America.

In Palestine, Dady and Omama first stayed in Heftziba and later moved to Herzelia. The penniless couple worked odd jobs to make ends meet, such as picking oranges in orchards and paving roads. Dady also worked as a Ghaffir, guarding crops and fields, and as a firefighter. They finally settled into a small apartment in Ramat Gan, and Dady got a job at Dubek, a local cigarette company. He started as a production worker on the line and later became a supervisor. He retired from that company in 1976.

Dady (as he signed his name in the albums he made for us) is the name we, his family, called him and knew him by. Aryeh Reiter, as he was known to the rest of the world, lived to see his family grow and prosper, and enjoyed his retirement in the same Ramat Gan apartment until his death in 1991. This talented man, with a sharp eye for perspective, never became an architect as he had dreamed and planned. Life took different turns after he was forced to abandon his architecture studies, and Dady was never able to complete them. He lived his life in the same one-bedroom apartment, making ends meet doing work he never liked or chose to do. The frustration of his missed career stayed with him even at his later years. When you take a look at the picture albums he created, crafting everything with his own hands, photography, processing, printing and designing, you can realize his talents and imagine what he could have become had his dreams not cut off by war.

Click on any image, use ⇐⇒arrows to flip through the pages.